‘People who study in these colleges are nationalists’ was chanted all throughout the country when students of University of Delhi(DU) either climbed walls to be part of Quit India movement or colleges gave shelters to the revolutionaries.

Despite that, DU contributed actively in the form of cadre and infrastructure in the Indian freedom struggle. In the University’s contribution to the freedom struggle, St. Stephens college played a prominent role.

The college has been a dreamland for all, known for its excellence in education and holistic growth of its students, St. Stephens College is rightly one of the top colleges, the University of Delhi has to offer.

The college was founded on 1 February 1881. Along with Ramjas College and Hindu College, it was one of the first three colleges to be affiliated to University of Delhi (DU).

If only one could lean over to listen to the walls of St. Stephens College, one would witness tales of bravery and patriotism.

St Stephen’s College along with Ramjas College played a vital role during nationalist movements such as the Non-cooperation movement and the civil disobedience movement.

Lala Hardayal, the first revolutionary, and Sir Chhotu Ram, who became the leader of Unionist Party of Punjab, hailed from St. Stephens College.

Aditya Rajendra Kumar, BA Programme, First Year, St. Stephens College told DU Beat that “It feels very humbling and slightly dizzying to know that I walk the same halls where the destiny of the country was decided”

They say that the only real freedom is freedom from fear and people in St. Stephens college were absolutely fearless. The desire to see a Free India surpassed the students and even resonated with the teachers as they were also an active part of the national freedom movements.

According to the official website of St. Stephen’s College, Charles Freer Andrews, an English teacher in the college, was known for his work as a conciliator and fighter against social injustice and political exploitation. Andrews was close friends with Mahatma Gandhi and Rabindranath Tagore. It is said that Andrews went to South Africa in 1914 to persuade Gandhi to come to India and lead the freedom movement.

Perhaps not many know the connection St. Stephens college shares with Mahatma Gandhi and with being the place where many leaders sat and decided the country’s future. For venerable St Stephens College, Mahatma Gandhi had a very special relationship, Gandhiji on his maiden visit to Delhi (after he came back from South Africa in 1915) had stayed with the principal of the college, Prof Sushil Kumar Rudra, inside the college premises.

Gandhiji stayed in Delhi from April 12 to April 14, 1915. During those days, the college used to run from the building in Kashmiri Gate. According to eminent historians of Delhi, he had confined to college premises on the first day. Some teachers, though, came to see him. They were keen to know as to how he fought for the rights of blacks in South Africa.

On the second day of his stay, students and teachers from nearby Hindu College came to meet him. The draft for the Non-Cooperation Movement and the open letter to the Viceroy, giving concrete shape to the Khilafat claim were prepared at principal Rudra’s house at Kashmere Gate.  A photograph, recording this visit of Mahatma and Kasturba Gandhi is still there in the principal’s office. 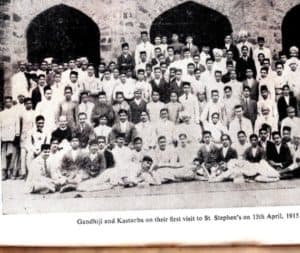 Gandhiji And Kasturba Gandhi at St. Stephens College when they first visited Delhi.

In the times when the British Government manifested high into the roots of the country, the time when they even controlled the funds of the University of Delhi. There was CB Young, an English professor and editor of the college magazine, who had the valour to write against the reigning government condemning the Jallianwala Bagh massacre.

Stephens has a glorious tradition and the fact that our college had participated in the national struggle is a significant indication of its commitment to noble ideals of patriotism and service to the nation.

Anushka Dasgupta, St Stephen’s College, BA History, First-Year said “We feel proud to have come into this inheritance and feel that it is our responsibility to keep up the ideals of our institution. It’s during the difficult times of our nation that we the youths come together and prove to be a true Stephanian.”

There was not a hint of fear in then, just 19 years old students when they went to great lengths for freedom. They actively participated in protests during various phases of the Indian Freedom Struggle. In 1946, Sameeruddin Khan, a Stephanian, disrupted the morning assembly and with 50 to 100 boys, they boycotted classes, organised a protest march, and pulled down the Union Jack from the flagstaff. Though the college was mostly run by Christian missionaries, it produced many freedom fighters like Amir Chand, Asaf Ali, Awadh Bihari, Brij Krishna Chandiwala.

On a quiet day, one could lean over to listen to the walls of St. Stephens College and one would witness tales of bravery and patriotism.