Maitreyi College to get its own McDonald’s outlet

The tussle between north campus and south campus has been old and continuous. While both campuses have their own hangout spots from Hudson Lane to Satya Niketan and Kamla Nagar Market to Hauz Khas Village, north campus wins with a McDonald’s in its vicinity. Swedish House Mafia tells us, ‘don’t you worry child. Heaven’s got a plan for you’. Finally, heaven’s plan has come to fruition. Tables have turned as Maitreyi College is now getting its own McDonalds franchise.

It is unbelievable how the college student union pulled this off, especially amidst the lack of proper infrastructural facilities throughout the university. An optimistic student of College of Vocational Studies placated, ‘Though my college has been dealing with collapsing roofs, but at least we will have a McDonalds nearby.’ Appreciating the commendable efforts, another student exclaimed, ‘Take that North Campus! I’m lovin’ it’. While south campus students are clearly delighted by the prospect of their own McDonald’s, other off-campus colleges don’t share their enthusiasm.  Talking to DU Beat about the upcoming fast-food outlet, a visibly frustrated student of B.R. Ambedkar College said, ‘As if the campus students didn’t have enough bragging rights. What’s next? An on-campus cinema? Do they even know we exist?’

Initially, the outlet will be functional from within the college canteen. The administration wants to re-vamp the canteen to match the aesthetic of a McDonald’s outlet.  A college official exclusively shared with DU Beat that, ‘We have to regularly cancel the tenders of our caterers since the students in the college choose to eat out rather than in college. As a result, the caterers end up leaving because they hardly make any profit and, finding new caterers is not an easy job.’  She informed us that the students will also get a personalised meal, and all items will be available at a subsidised rate.

Since junk food is directly linked to obesity, high cholesterol, and diabetes, it becomes controversial for an institution to endorse a fast food outlet. Researchers have observed that students need wholesome and healthy food to improve their mental rigour and health . To this, a college official insisted that the college will ensure maximum supervision over the quality of food items. She further added, ‘As much I would like my child to give up junk food, there’s little I can control. Hence, if the college is proactive in taking steps to ensure the quality of the food, I feel a little secure.’

This new change comes right on time, just before the renowned DU fest season. If exploited, it can become an efficient and profitable marketing scheme. It will be intriguing to see how an in-campus McDonalds outlet will impact the crowd turn out and also if other colleges will follow suit. Moreover, it can also be expected to positively affect the admission intake this year.

Disclaimer: Bazinga is our weekly column of almost believable fake news. It is only be appreciated and not accepted. 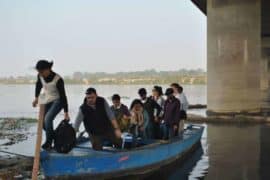