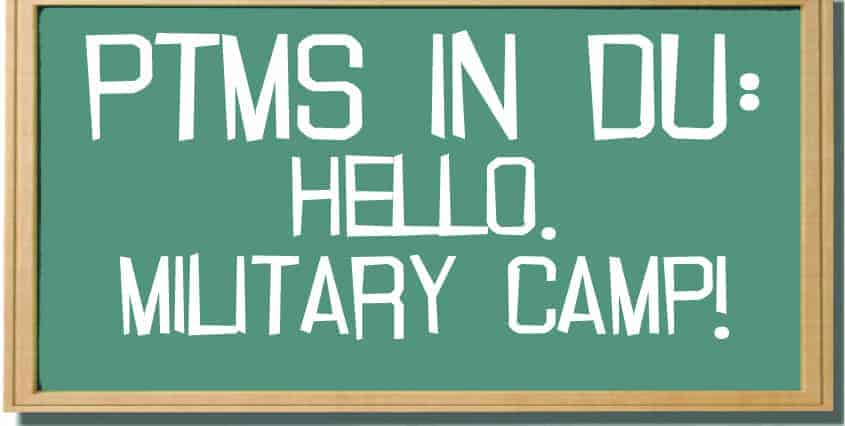 Remember the time when one weekend in a month (or two) neared like impending doom? Remember the circulars, placidly inviting all the dear parents for a “healthy” interaction with the teachers, about how their children were doing at school? I remember dying a little bit inside every time we got one of those. I also remember trudging along nervously, as I would lead my parents up the stairs, to the dark chambers of classrooms and staff-rooms where the teachers waited for the next victim to be slaughtered, while a friend would pass by with a throat-slitting signal and a whispered “yaar aaj to lag gai.” I remember sitting there awkwardly, being talked about in grave tones of concern like I wasn’t even there, having everything from my marks, habits, activities, uniform and even my friends being discussed and dissected. I wasn’t that bad a student, so I would alternate between taking my mom to the teachers who would praise me and those who were sure to land me a lecture on the way back.

Come college, I thought all that was over. But now after I’ve settled down into the comfortable routine of doing things my way, without having to worry about having my activities discussed later, DU decides to burst my bubble. Delhi University’s reported proposal to form a parents’ coordination committee sounds to me like taking a huge leap backwards in the process of student development. What has been supposedly proposed for better administration and policy making seems like not just another way to poke moral reprobation on students’ campus activities, but also as destroying the fundamental difference between college and school life.

When you become a college kid, you’re suddenly in a zone where you’re the only one looking out for yourself. There’s no one you’re really accountable to, be it about your attendance, your studies or the kind of friends you make. Your choices are your own and you’re the one who has to face the consequences. College is also probably the time when most of us learn to become responsible and somewhat independent, be it paying the fee (which I’ve experienced by now to be an extremely harrying process in DU), filling the forms on time or maintaining your attendance and proxies to be able to scrape through and give the exams. Part of the vibrancy and culture of college, which distinguishes it from school, is that when we’re dissatisfied, we can raise our voices because we know what we say counts, and the administration is accountable to US. If parents are going to be introduced in the college scene, for more “accountability” towards the students, what are the students going to do? We’re adults now, we hardly need parents as mediators. But I guess by the end of the year we might be seeing parents hawking around campus and parent-teacher meetings being held, in a back-to-school atmosphere where all that college will be left signifying would be a lack of uniforms.

[email protected];A 2nd year student of English at LSR, I’m impulsive, independent and I hate monotony. Always eager to explore and discover, I love visiting new places and meeting new people. A big coffee-lover, I love to dance and listen to music, but I express myself best when I write.

Our Future is at Stake: DTU Students Against Online Exams