On December 4, 2019, The Bar Council of India had stated that the approval or recognition of Delhi University’s Campus Law Centre, Law Centre I and Law Centre II, that provide three-year degree course in Law, would last only till the academic year 2016-17. This suggested that only the students who have taken admission till the academic year 2016-17 will have a valid degree in law for the purpose of enrolment as an advocate in any state Bar Council. The administration has not yet come out with any official clarification which has created a sense of panic and anxiety among the students.

Another issue about which the students are concerned is regarding the tender for printing of case materials which has not been issued midway into the ongoing semester. This has caused incalculable loss to students as printed textbooks remain out of bound and has specifically harmed students belonging to the marginalized and Economically Weaker Sections (EWS) of the society, many of whom cannot access the case materials even in the digital form.

In a press statement, Akshit Dahiya, President, DUSU, said, “Being a student of law at one of the three centres, I completely relate to the grievances of the protesting students. While the fog regarding the issue of the Faculty’s recognition has engendered widespread fear, the unavailability of case materials, being the primary requirement for learning at the Faculty has left the student community helpless and infuriated. We will continue to support this agitation until this basic requirement, the absence of which is disproportionately affecting the marginalised and EWS students, is fulfilled immediately.”

Vinayak Sharma, Convener, ABVP North Campus said, “The administration by failing to fulfil its basic duty to seek timely approval from the Bar Council of India has created widespread fear and panic among the Faculty’s student community. As long as any plausible explanation is not forthcoming, we will continue to struggle on behalf of thousands of such students whose careers have been brought on the edge of the precipice because of the administration’s ineptitude.”

A delegation of protesting students called on the Dean of the Faculty of Law and presented a Memorandum in respect of their demands. While the delegation received assurances regarding the immediate fulfillment of two demands – namely, an official notification regarding the recognition status of the Faculty of Law, as well as the issue of tender for printed case-materials, two other demands – namely transparent evaluation parameters and the declaration of semester results were promised to be discussed by a Committee of teachers to be constituted shortly and consequently met as soon as practically possible.

DUSU alleges DU of Discrepancies in Admission of OBC/EWS Categories 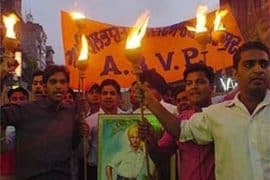