With the Delhi University Students’ Union (DUSU) elections right around the corner, students of Delhi University, notably from Law Faculty, have handed a memorandum to the election officer to include a ‘None of the above’ or NOTA button in the upcoming DUSU elections 2015-16 which will be held on 11th September.

As conveyed by the students in the memorandum, they believe that in DUSU elections, voting percentage is very low and they claim the main reason behind this slow voter turnout in the current time is due to the absence of NOTA button in Electronic Voting Machine (EVM).

The students have related this with India’s past history of recording negative voting during elections and the introduction of NOTA button two years ago. Verdict of the Supreme Court came in the year of 2013 on the petition of PUCL, in which Honorable Supreme Court directed the election commission of India to provide NOTA button in the EVM. This was to preserve the legacy of negative voting which is cardinal principle of democracy. Prior to this, there was a mechanism present to record negative voting.

In the existing Delhi University Students’ Union (DUSU) elections, the students conveyed through the memorandum that a dissatisfied student voter won’t turn up on the day of elections to vote if none of the candidates are of their choice. However, they are hopeful that if the NOTA option is provided, then reluctant student voters will begin turning up to vote which will increase credibility and acceptability of DUSU elections amongst the DU student body. They believe it will initiate a gradual but systematic change and only those students will contest elections who believe in the principles of accountability and integrity. 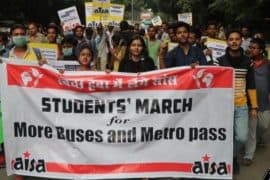 The Democracy is Broken: Scenes from the Vote Counting Center

The Last Laugh: What Happens After DUSU Elections