Motilal Nehru College(MLNC) witnessed a two-hour-long protest organised by the Student Union; many students blocked the college gate, making it difficult for vehicles to enter or exit. The protest was called off and many students went down to the Delhi University Student’s Union (DUSU) office to protest again.

It all began from MNLC’s Student Union’s desire to have a high budget fest this season. Before this year; the cultural society of MLNC(M), the student union of MLNC(M), and the student union of MLNC(E) used to have separate fests with separate names. This year, all of them collectively decided to have a single, high budget fest. There were many issues within the organising committee itself regarding the name of the fest, given all 3 used to have different names, but more problems awaited them owing to lack of cooperation from the administration.

As it goes at any other college’s fest, the organising committee worked day and night to gather sponsorship and finalise an artist to make their event bigger and better. The union had finally locked down Punjabi Singer “Karan Aujla” and even a pseudo-MoU had been signed. Whatsapp Groups of the students of MLNC saw this graphic being circulated.

But shortly after, the administration office introduced several restrictions for this new fest, they demanded no other student apart from MLNC to be able to enter or attend the Star Night event. This caused a lot of backlash from the student community and only half an hour later, these two graphics were circulated amongst similar groups.

Next Morning, many students participated in the protest organised by the Student’s Union. The Student’s Union highlighted many incidents of Corruption from the Administration office, giving examples of Letterheads and lack of Nescafe booths in the college premises, and demanded for the star night to be brought back with their demands and for the administration to cooperate regarding the signatures on the MoUs.

An English Professor from MLNC said, “There is always a gap between the understanding of the advisory committee of the Student’s Union and the people from the Student’s Union. If they claim for the Administration (office) to be corrupt, you cannot ignore the fact that they are somewhat corrupt too and this might be the reason that they joined student politics in the first place.”

According to the Union and the organising committee, the administration office has not been really helpful or supportive regarding the annual fest ever, and this year has been way worse compared to previous years and the efforts being put in the Student Union.
The sit-in protest at the college gate lasted for almost 2 hours, during which only selected vehicles could enter or exit the gates. This led to disruption in the day-to-day activities of the college and after a while, the protest had to be called off because of pressure by the Police officials and the administration. 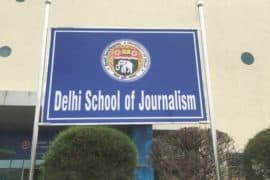 In midst of lockdown, Delhi School of Journalism Asks Students to Pay Hefty Fees Within 48 hours 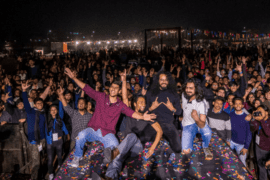 Fest and Politics: Where Should DU Draw the Line?