People were at the extremity of their seats in deep anticipation, with their eyes glued to their television and mobile screens when this year’s Union Budget, Budget 2020 was introduced by our Finance Minister, Smt. Nirmala Sitharaman in an endeavor to resuscitate the ailing economy of our country by measures to restore the economic growth as well hoick people’s incomes.

Budget 2020 is hinged on three broad themes- Aspirational India, Economic Development, and Caring Society. The Budget speech delivered by our Finance Minister went on for more than two hours and 30 minutes and hence, was by far the longest till date. Sitharaman had even more to say with two pages of the speech left, but had to end the speech and sit down due to health issues.

From introducing tax reforms, and making tax administration more efficient to measures for boosting infrastructure, the Budget 2020 was full of various things. Here are a few key takeaways of the Budget 2020-

The income tax slabs were majorly overhauled. The Finance Minister introduced a brand new tax regime and made it optional for the tax payers to either switch to the new one or continue on with the old regime. The catch here lies in the fact that if one chooses the new tax regime, certain conditions apply. The tax payer would have to give up all other income tax deductions. These include standard deductions, house rent allowances, etc.

“The government is committed to doubling the farmers’ income by 2022 and the budget aims to boost the income of people and enhance their purchasing power” said Finance Minister, Nirmala Sitharaman. She announced a 16 points plan for the farmers. The Government allocated INR 2.83 lakh crores for agriculture and allied activities, irrigation, and rural development. The center will also provide encouragement to state governments who implement model laws like Model Agricultural Produce, and Livestock Marketing Act of 2017. Further, the Finance Minister also proposed extensive measures for 100 water stressed districts in the country, along with promises to raise the credit availability for farmers to INR 15 lakh crores.

In addition to all this, the budget also talked about matters relating to expansion of the Pradhan Mantri Kisan Urja Suraksha evem Utthan Mahabhiyan (PM KUSUM) scheme, to help 20 lakh farmers in setting up standalone solar firms. A “Kisan Rail” has also been proposed to be set up under the Indian Railways.

In line with the three major themes of the Budget, the Government allocated around INR 99,300 crores to the education sector which is in addition to the aim of increasing foreign investement in the sector for rapid growth. An “Indo- SAT”exam under the “Study In India” scheme has also been proposed for giving educational opportunities to African and Asian students seeking education in India. Nirmala Sitharaman also mentioned that the government will introduce a New Education Policy soon after recieveing over 2 lakh suggestions for the same.

In an augmentation of its disinvestment drive, the budget proposed to sell part of its holding in the LIC through an initial public offering, i.e. IPO.

5) Increase In Security For Bank Deposits-

Against the backdrop of the Punjab National Bank (PNB) scam, this is a really positive step in view of the bank depositors. Insurance cover for bank depositors has been raised from INR 1 Lakh to INR 5 Lakh.

6) Decriminalization Of Offences Under Companies Act-

The Finance Minister announced a Tax Payer charter to shield tax payers from harassment. According to her, this proposal of decriminalization was made to respect wealth creators.

Finance Minister further announced a Task Force, in order to analyse and decide upon the legal marriageable age for women, so as to reduce the maternal mortality ratio. A lower mortality ratio means that women would be better health-wise. Around INR 30,000 crore has been allocated to the Women and Child Development Ministry, which is a 14% increase over the amount allocated to it last year. A major part of this amount is dedicated to Anganwadi services.

This wraps up the key takeaways from the Budget 2020. Hopefully, the condition of the Indian economy will improve and India will be one step further in realizing its goal of a 5 trillion dollar economy, after all the promises and announcements made by the Finance Minister this year. 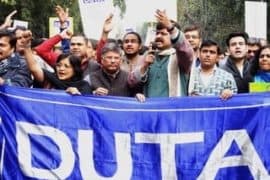