Martyr’s Day: Oh! How grand is death too

As the wholen nation pays its tribute to the martyrs, it is also important to gain an insight into the lives of the families of martyred soldiers and assess the various issues.

Oh! How grand is death too

For the ones martyred

What pain they must have gone through,

when those vicious bullets rained.

Courage like this is showcased only by a few

Sacrificing all for the homeland.

Every year, on the dark day of assassination of Mahatma Gandhi i.e. January 30, India observes the Martyr’s Day to pay her honest reverence to her brave freedom fighters and martyred soldiers. At exactly 11 o’clock, every citizen is supposed to observe a 2 – minute silence in remembrance of these heroes. This gesture appears very small in front of their great service.

When a soldier is martyred, he is honored with medals and people mourn his death for a few days; but the real brunt is faced by his family. The permanent absence leads to social, economic and psychological problems for the family. Hundreds of children are forced to grow up without a father and many wives are left with the memories of the love they had, penned in numerous letters. The social and economic aspect can be solved through vigorous support and care and various educational and financial facilities. ‘Vasantharatna Foundation for Arts’ is a NGO that works to empower the families of martyred Jawaans.  But the psychological emptiness is often too deep to mend.

Still the families of martyrs catapult themselves out of the abyss of grief and find pride in the sacrifice of their loved ones. In an interview to ‘Rediff.com’, the family of Captain Saurabh Kalia who was ‘captured, tortured and barbarically killed in the Kargil War, explains how they have coped with his death and are still fighting against the heinous war crime he had to go through.

But the concern that arises is – How long will we keep losing these young souls? Will the fear in the heart of a soldier’s parents ever come to an end? We call ourselves ‘advanced’ and ‘civilized’, yet the decade began with the fear of outbreak of World War 3. It is without any doubt that our martyred soldiers deserve the highest honor and admiration but none should be made to take the bullet because of the pettiness of some politicians or the failures of our diplomats.

Mahatma Gandhi quoted, “Peace will not come out of a clash of arms but out of justice lived and done by unarmed nations in the face of odds.” It is time that we rise above our perceived divisions and selflessly strive to build a better world for everyone. 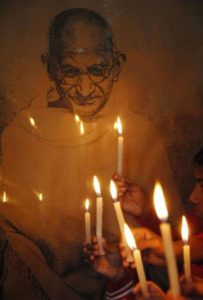 Oh! How grand is death too

For the ones martyred

As towards the heights of glory we go,

Their selfless service will forever be remembered.

As they leave to be cradled in the loving arms of motherland.
Featured Image Credit – Press Trust India

Dictionary of Martyrs: In the Betwixt of Tribute and Wrangles