The University of Delhi’s (DU) Administration has decided to make some regulations to “improve the condition of women” studying in the University, which will be enforced from 18th March 2018.

In order to retain women’s dignity, DU has imposed a dress code for all female students to “protect them from the male gaze.” Any woman dressed “indecently” will not be allowed to enter the college premises. One of the professors of DU claims that this decision was made only for the benefit of the female students and it must be respected.

A five-page circular has been released on the official DU website that specifies the dress code according to each season. Just a day after the circular was published, residents of the Rajib Gandhi Hostel for Girls burned the circular outside the warden’s office in protest. Similar news from other hostels also emerged.

Furthermore, in order to put the backbreaking efforts of Gender Sensitization Cells (GSCs), the Women’s Development Cells (WDCs), support groups, etc. to rest, DU has ordered a ban on the creation, functioning, and association with the queer and feminist collectives in all the DU colleges. When asked for a reason, one of the members of the administration made a claim that the history of these groups had been scrutinised before coming to the decision. He further added, “The feminist groups have historically shown a pattern of eventually turning into feminazi squads. Therefore, this decision is crucial in order to protect the minds of innocent female students from getting corrupted.” The ban on queer collectives is further defended by him as an adherence to Section 377 of the Indian Penal Code (IPC) and the Section 292-4 of the IPC (obscenity prevention).

Attacking these rules and the sections on the grounds of being “backward and ambiguous”, the WDCs all around the DU colleges have taken to the streets in protest. Though the women’s colleges were seen in the forefront, groups like Pinjre Tod and Nazariye have also joined hands with the WDCs. Meanwhile, GSCs have called for demonstrations to symbolise that women and the queer community are fully capable of making their own decisions and do not need any binding rules in order to decide for them.

In response to these protests that made the daily functioning of the office difficult, the administration has offered to establish a Redressal Committee headed by three men. However, this has not left the students satisfied. During a protest that took place on Monday outside the Vice-Chancellor’s office, Sheena Rawat, President, WDC, Cluster Innovation Centre, told DU Beat, “The fact that the Redressal Committee is proposed to be headed by an all male panel proves that they have not understood our demands.” “The protests won’t stop till these rules are revoked,” another demonstrator asserted.
Disclaimer: Bazinga is our weekly column of almost believable fake news. It is only to be appreciated and not accepted! 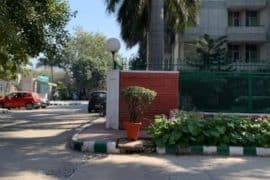 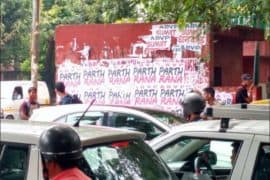