Students’ Union Elections for the academic year 2016-17 were hosted in Kamala Nehru College on 6th October, 2016.The last year’s Proctor, Komal Priya, of Geography Honours; was declared the President of the Students’ Union for this year. Unlike last year, none of the posts went uncontested; where the post of the President witnessed four contenders, Vice-President and General Secretary saw three and two contenders respectively.

Ritu Yadav of B.Com (Pass), the Vice-President, has also formerly served in the union as a Proctor in her first year. There was a huge margin of victory for the President, Komal. Prasansha, a second year student, was tagged with the post of the General Secretary; who defeated her opponent by 300 votes. Vandaya from 1st year is the new Treasurer for Kamala Nehru College, who grabbed the maximum margin of victory of 400 votes. The Proctor Team for first, second and third years is headed by Monika, Aayushi Jain and Nidhi Sharma respectively.

This election was preceded by a pre-election debate on 29th September, 2016 and an interview round presided over by college union authorities. Kamala Nehru College’s Union Elections were delayed by a few weeks due to the NAAC visit to college earlier last month. The team is currently preparing for upcoming Diwali celebrations in college.

All You Need To Know About Studying Journalism At DU 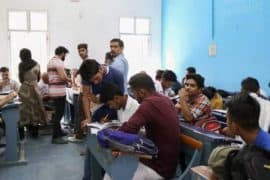 KNC Conducts Divinity Trials: 38 Applicants Turn Up Out Of 178