One of the many things that make the University of Delhi happening and enchanting is the performing arts societies and their marvelous annual productions. In the past few months, we saw cut-throat competition across several Delhi University colleges. The hours and hours of practice and hard work were put to test this fest season and from amongst the pool of massive talent, some groups emerged brighter than the others. We attempt to select the best society of the lot.

For the Indian Folk Dance (Group) category, Nrityakriti of Maitreyi College topped the list with 13 points. While Bhangra Inspire of SGTB Khalsa College bagged a total of 11 points, followed by Nrityangana, the Folk dance society of Sri Venkateswara College that secured 5 points.

The Winning Society at a glance
This year Nrityakriti picked a Haryanvi dance form called Khoria. This simple yet powerful and upbeat dance form is performed by women in central Haryana during important occasions like harvest, marriages, etc. With their graceful steps aided by their swirling skirts, Nrityakriti secured the top spot from amongst an array of highly competitive and vibrant teams.

Madhini, the President of the winning society, told DU Beat, “Nrityakriti is so much more than a society, it’s a family and I believe that our victory was only possible because of each and every member, be it the performing members, seniors, or other non-performing members. We have always believed in competing with ourselves and I think that is what inspires us to push our own limits.”

(Hover over the icons to know more about their victories) 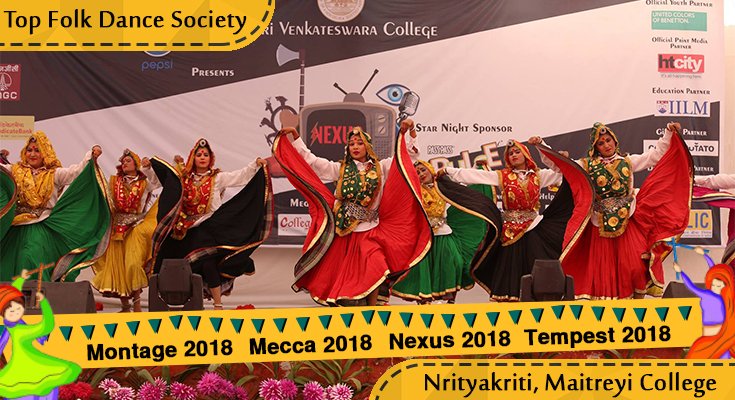 Niharika Dabral is an average anti-national feminist who is currently pursuing Journalism at Cluster Innovation Center. This quixotically honest and technologically challenged Garhwali strongly advocates that Harry Potter must be included in elementary education. If you want to rant about how unfair life is or want to share something awful or awesome that needs to be reported then feel free to drop her a line at niharikad@dubeat.com