With a unique theme called Neon Noir combining elements from the past and future, Oasis started on an eventful and multi-layered note.
Since the past 49 years, Oasis has been a major player in the college fest scene drawing students from all over the country to Birla Institute of Technology and Science, Pilani around this time of the year.

The theme of this edition was Neon Noir. The term in itself expresses two contrasts, Neon signifying the neon lights and cyberpunk future popularised by anime and movies like Blade Runner, while Noir has always been a major genre in pop culture to give a stylish portrayal of the past epitomised by gangster movies, and crime thrillers.

The amalgamation of the past and present through pop culture was quite evident from the magnificent artworks at Pilani’s auditorium, with classic references to Christopher Nolan’s bleak noir-influenced Batman films, the neon coloured heroes of Into The Spiderverse, and many more.

The inaugration saw musical performances and a talk by Madhur Bhandarkar, the acclaimed filmmaker behind movies like Fashion and Page 3. Talking about directors the next day, saw the inaugration of the BITS film festival by Highway and Rockstar-director Imtiaz Ali. Ali talked in detail about his experiences with Oasis in his student days, handling rejection, among other matters.

On the competitive side, Day 1 was marked by the Stage Play competitions and a showcase of fusion music called Tarang. The afternoon saw an extensive choreography event called Choreo where Hindu College’s choreography society Srijiya bagged the first position.

The star of the night was American multi-instrumentalist and electronic musician Dan Deacon who had an interactive musical experience for the crowds at BITS Pilani. Deacon was joined with a Bangalore independent rock band called Iyers Filter Coffee.

Apart from this, the day also saw movie screenings pertaining to the theme like Drive and Blade Runner 2049, along with star gazing sessions. Under the clear night sky and donned with the right mood lighting, the entire campus turned into a photographer’s paradise.

Sunidhi Chauhan, the queen of power ballads in Bollywood, gave the audience at BITS Pilani a whiff of nostalgia as she performed her classic songs from the 2000s and 2010s, and drove them to pure madness as she and her backup singers harmonised and whipped out their best moves together. For the students of BITS, it was a night to remember indeed. However, the crowd did get a little wild and the scene became chaotic with a barricade almost being broken.

Now as the second night comes to an end, let’s see how the remaining days go by, with more events and performances  by Biswa and Nucleya. 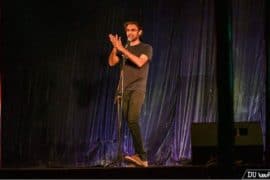 Ashish Shakya and Karunesh Talwar Call An End to Oasis’17