ABVP Clashes with the Left at JNU; Students Injured

The members of ABVP and the Left warred over Non-Vegetarian food on Ram Navami. Several students have reportedly been injured in this tussle. Read to find out more.

On 10 April 2022, a clash between the members of Akhil Bharatiya Vidyarthi Parishad (ABVP) and the left-wing had taken place at Jawaharlal Nehru University (JNU). On the auspicious occasion of Ram-Navami, a widely celebrated Hindu festival, students suffered injuries due to hostility between the members over the consumption of Non-vegetarian food. Students from JNU have been severely wounded as ABVP allegedly stopped the cooking of Non-vegetarian food in Kaveri Hostel, JNU.

According to the All India Students’ Association (AISA), members of ABVP had allegedly tried to forcibly stop the cooking chicken in the Kaveri hostel of JNU. As a part of the mess schedule of the hostel, chicken is supposed to be served to the Non-vegetarian students and paneer is supposed to be served to the vegetarian students on every Sunday in JNU. AISA believes that JNU, being a central university, students come from several communities from all over the country and study in this University. They believe that it is a part of the inclusive and syncretic culture where students eat the food of their choice in the same mess. AISA is likely of the opinion that the campus has opened up after a gap of two years and students are finally living their campus life. However, according to them, the ABVP is reportedly coming down on students with their full-fledged hooliganism.

As told by AISA in their press release, when the preparation of dinner started in Kaveri Hostel Mess (JNU), hooligans of ABVP appeared to stop the cooking of chicken, Common students all over the campus reportedly tried to resist the ABVP led food fascism.

Drunk with the intoxication of power, ABVP goons like Ravi Kumar, Prafull, Vijay and Raj violently attacked students and activists.

AISA members- Akhtarista Ansari, Madhurima Kundu and Sai Balaji are severely wounded, as told by AISA in their press release. According to them, Akhtarista Ansari has been severely wounded in her head. AISA believes that it is a constitutional right of every citizen to eat the food of their choice. In their opinion, it is a part of the definition of India where everyone has a right to the food of their choice. AISA in its press release has asked to resist this food fascism.

The situation continues to remain tense right now. It’s absolutely deplorable. It is only a continuation of the sanghi agenda of saffronising the campus.

On the other hand, according to ABVP, the residents of Kaveri hostel had organised a pooja on the occasion of Ram Navami and this event was supposed to be joined by a large number of common students of JNU. It is also noteworthy, as per ABVP, that Ramzan is being celebrated in the hostel very peacefully and simultaneously. As stated by ABVP, this pooja was supposed to start at 3:30 PM but due to the ruckus created by leftists, it could only start at 5:00 PM.

According to ABVP, the Leftists, however, do not digest this fact. Neither in the country nor in the campus. As they plan to break the country, they planned to create a ruckus among the students by throwing the issue of ‘Non-Vegetarian Food’ at them.

As per them, ABVP stands firmly with the unity of the student community. ABVP, in their press release, ensures that any evil effort to dismantle this unity gets exposed. According to them, Left organisations are trying to drag ABVP into this issue, which is only their propaganda to gain media attention. ABVP confirms that this event was organized by hostel residents only. As stated by ABVP, this act of politicising a religious celebration by the left is a shameful act and ABVP condemns it from the core. 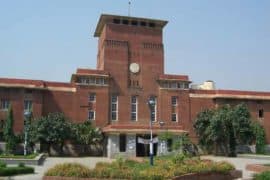