Jason Porath, a former DreamWorks animator, is charming the internet with exquisite illustrations on the lives of women that history would much rather forget. Amusingly orchestrated, Rejected Princesses project is a milestone for the discipline of Feminist History.

The earliest art discovered was attributed to the acumen of prehistoric man, by archaeologists trained in mainstream perspectives of history that are often informed by patriarchal values. Assessments of revisionist historians charted a nouveau inquiry altogether: the handprints on the cave walls belonged to women instead. More than a century later, this rampant othering of the Woman in hu-man-ity’s History is blatantly obvious: the understatement of female contribution has been patriarchy’s favorite instrument of suppression since times immemorial.

Her wings are cut and then she is blamed for not knowing how to fly. 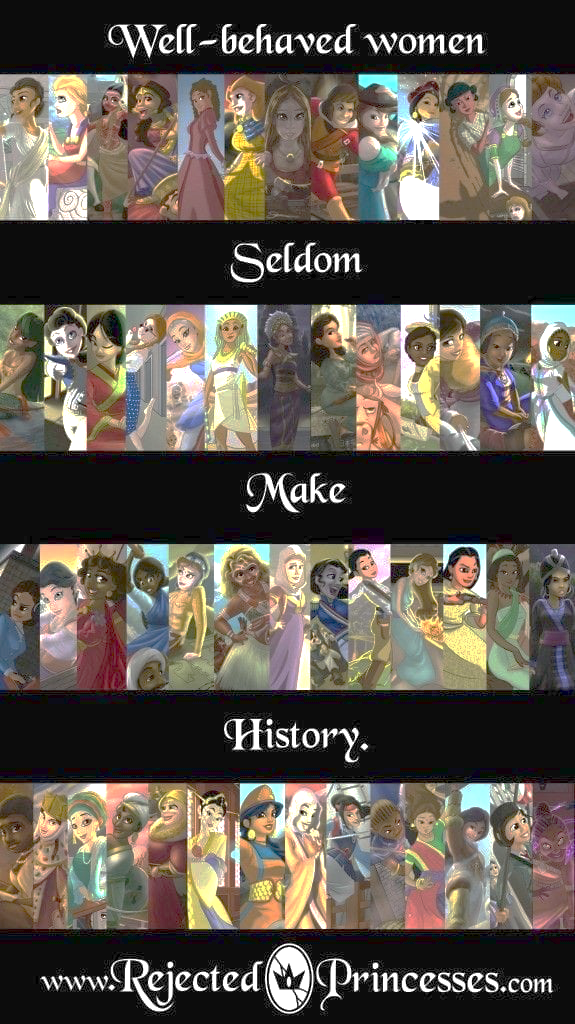 Confining the Woman outside the bounds of History, reducing her to a chattel of civilization, and scratching her name off the wall, before accusing her of being an impotent source of historical achievement, are tactics older than time. What is new is the conviction of today’s artists in leaving no stone unturned to recover the lives of extraordinary female icons from oblivion. ‘Rejected Princesses’ is one such outstanding project on women’s history that seeks to illuminate the lives of unconventional female figures that you will not learn about in a classroom setting.

The brainchild of Jason Porath, a former animator, an illustrator, and an aficionado of ‘the History that they do not tell you’, Rejected Princesses possesses all the elements of an amply philosophical work of comic art. With the rib-tickling humor of a ‘Horrible Histories’, and a certain reverence for its own subjects that remains unmasked in Porath’s simplistic prose, Rejected Princesses is out there earning a place for itself besides the likes of Calvin and Hobbes or Peanuts.

Porath’s efforts are evidently self-aware – the website seems to exude at once surety, and yet surprise, over its own overstepping of masculine boundaries in history; a chance project, Rejected Princesses will be no short of history itself for its courage and innovation, and already research papers are beginning to cite it as a source. The most alluring aspect of the website is Porath’s latent talent of narration coupled with blindingly beautiful artwork.

What began as a playful pondering upon ‘Womankind’s History’, has transformed into a viral website of such rarified illustrations, that even the most vehemently parochial of history enthusiasts would be forced to concede defeat before Porath’s awe-inducing research and graphics. Each post is made with over-pouring regard to the ideals of feminine history, and one can almost imagine the artist’s pen hovering over the minutiae, bringing to light every detail of the subject’s life from centuries of darkness.

It is sheer delight for a student of history to stumble through page after page on unknown women of astounding wit and bravado, when lessons revolve around little other than great kings and passing mentions to the female presence in their lives. The end product of efforts like Rejected Princesses, gives hope for a future where the study of history is more equitable with regards to historically marginalized groups.

When it comes to history… boys are presented a wide range of figures, morally speaking: anyone from Abraham Lincoln to Adolf Hitler. With women, it’s much more narrow, usually just “the Good Girls” of History. Even when you do find someone who’s more complex, the edges are filed off. You learn about Amelia Earhart, but not how she was a polyamorous libertine…

The intent behind the project was a compilation of women whose exploits are considered unsuitable to the ears of a child in a society where the submissive idea of a meek and helpless princess still persists as a valid archetype for young girls to emulate. The idea of a ‘rejected’ princess is the artist’s message to fledgling feminists: the world will undoubtedly attempt to hold you back on account of your sex, but here is a whole range of defiant women to look up to.

…you learn about Helen Keller, but not how she was a socialist firebrand. And often, the most interesting women that go against the cultural ideas that we have don’t even get taught – few have ever heard of Rani Lakshmibai or Savitribai Phule or Cornelia Sorabji (beyond the scholars of Indian History). I wanted to put out a warts-and-all version of womens’ history to combat the sanitized “Disney princess” version of womens’ history.

While history remains a mute witness to the women who suffocated to anonymity between the pages of bulky tomes on battles and exploits of men in power, our generation’s growing social consciousness- ‘woke culture’ if you will- insists upon a rightful place for the unsung women of history. This is a sentiment echoed throughout Porath’s work.

Women who do make History and refuse to be erased are often painted as salacious and insidious figureheads of mass ruin, case in point Queen Isabella or the ‘She-wolf of France.’ One need not dig very deep to realize that the foundations of modern society are built on the blood of midwives who were burnt as witches for their profound knowledge of medical science. Porath has taken it upon himself to re-examine these perspectives.

My love for this website is absolute and boundless: I came across it at a time when mocking commentary over the absence of women in history was thrown around in literature, media, and classrooms like some perverse kind of victory. The growing awareness of ‘woman erased’ and recent strides made by Feminist History are first and foremost an attempt to cultivate self-conviction in the minds of young girls. Rejected Princesses stands as an artistic epitome within the larger context of the movement that might even usher in the next wave of feminism. When it comes to women reclaiming  History, we are only just venturing forth, and moving away from the traditional perceptions in order to view a static subject from the lens of female marginalization is the perfect beginning!

You can buy the book here: https://www.amazon.in/Rejected-Princesses-Historys-Heroines-Hellions/dp/0062405373

The Four Horsewomen of Rock: Gender and Uprising

Women Who Showed The Way: Early Feminists Of Modern India

Of Fictions and Fables, and Misandry