18th of December, 2021, marks the 66th death anniversary of the celebrated Indo-Pak author Saadat Hasan Manto. DUB revisits the mayhem and madness of partition captured in his prodigious body of work, and analyses the genius of Nandita Das in translating the timelessness of ‘Mantoiyat’ onscreen.

The year is 1947: brutal red becomes a reluctant verse to India’s song of freedom, hearts get divided against a backdrop of anarchy, and Manto serenades the seemingly sinking ship of humanity, providing tenor and musicality to this unfolding misery. Manto’s unflinchingly brutal narrations of the horrors that were brought to light by the first ray of freedom, form their own genre of partition literature – ‘Mantoiyat’. Evoking this brand of artistry from 70 years of dust was no easy task, but Das succeeds in her endeavour to bring alive Manto and the tumultuous times he witnessed.

Nandita Das’s visual is gritty, lucid, and chaotic; it embodies the artistry and essence of Manto. As a host of figures from the history of Hindi cinema caper across the screenplay of Manto’s life, history becomes a sentient entity guiding you through the blood-soaked artifacts of 1947. Passing remarks, from K. Asif’s resolve to direct Mughal-e-azam to heated discussions over the future of Bombay Talkies, all carry signs of the larger history that happened to conspire off the lens. And at the center of this whirlwind is Nawazuddin Siddiqui’s Manto, weaving tapestries of ink in the secure lap of his beloved Bombay.

This role is Siddiqui at his finest: the actor ceases to exist once he dons the personhood of Manto. There are scenes that make you wonder if Nandita Das invoked Manto himself from the dead, such is the finesse of Siddiqui’s art. Perhaps the most underrated performance that I have ever come across, Siddiqui’s Manto is more than what any book or script could have anticipated: so deeply human, a three-dimensional character most precisely portrayed. No names come to mind that could have fit the role any better or done the doomed author more justice. 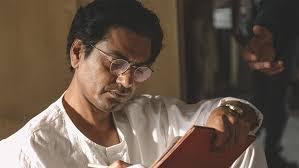 Das unearths the Manto that history forgets beneath the layers of sardonic spectacles he wrought: the playful master of words, the arch-nemesis/close confidant of Ismat Chughtai, the man who ‘hiptullafied’ through the starry circles of early Bollywood, the father who wrote nonsense verse. The deeply troubled human.

The narration begins at the very point when Manto’s writings began their descent to murky depths of despondency. Harrowing news gets shut out of the jubilant halls of Bombay’s elite: it is the time for celebration, not weeping. As the famed maestro Jaddan Bai’s melody wafts through Ashok Kumar’s fiesta, the screen pans onto Manto’s piercing gaze. One wonders if the lyrics premonitioned the misfortunes that befell Manto in the wake of freedom:

The wheel of time turns, Nandita Das and company make a careful guesstimate of the circumstances under which Manto fled from Bombay to Lahore, and Jaddan Bai’s melody haunts the air. Must the heart be broken this way, derided of its homeland, to be aware of its existence? Manto’s pangs of separation answer yes.

When Manto was still largely untouched by the deadly tide of history, he had playfully pointed out an ancestral graveyard in Bombay as his final resting place. True to his word, he left behind all of his heart and soul in Bombay, leaving the city as a mere shell of a human. Tragedy followed in his wake: death, destruction, and dereliction all around, Manto found himself in the clutches of  a damaged, melancholic psyche. As his pen charted the aftermath of the lunacy of 1947, his words became darker.

Manto saw the savagery and unabashed animality of his time. Was he really to blame for his frank rhetoric of the partition period? Must an artist resolve to encrust gems into the dirt of the world around him? Or should he be as candid as possible? There is no correct answer, only frozen friezes of Manto’s memories of the madness: He was no hypocrite, he wrote what he saw. And if his writings appalled his peers he would simply remind them that they were looking into a mirror of the atrocity around them.

Manto’s writings drew the ire of more conservative sections of the society and bewilderment of his circle of writers. While several rounds of court hearings sought to further break his spirit and sanity, he couldn’t care less about the verdict. All he wanted was validation that yes, indeed, his words were art.

The never-ending court cases clashed against his stubborn candidness, eroding his sanity further. As he begins to hallucinate his dear friend Ismat Chughtai outside the courtroom, or his forever companion, actor Shyam Chaddha, singing,

one gets as close an insight into the crumbling façade of strength. Manto has lost his way home, and his sense of what is his and what isn’t, to the dictates of partition and communalism. This is where he becomes the protagonist of his own story ‘Tauba Tek Singh’: a man who belongs to neither side of the border, a flitting, stumbling artist whose very identity was partitioned, whose psyche was mottled by the lunacy to which his society descended. On the no man’s land between the two nations did Manto lose his ability to be happy.

As Manto was truly born out of and rooted into the stories he wrote, montages of his short tales intersperse the screenplay. They add to the characterization; they detail the process of Saadat Hasan becoming Manto. There is no artist without the art, and these shorter movies seek to enhance your understanding of Manto.

Manto succumbed to alcoholism at the young age of 42. His sorrow and longing finally overpowered him. Had he been alive today, the growing obsession of literary minded youth with his turbulent symbolism would have amazed him. 70 years down the line, with growing social consciousness about the partition period, Mantoiyat has become synonymous with exploration of the sub-continent’s torn history. Nandita Das’s exquisite tribute is only the first in a long line of autobiographical sketches that will follow in the coming years.

Indigenous Communities, Forests and Wildlife: A Sacrosanct Relationship of Co-existence