Three final-year students from Hindu College made a short film, Faisla, that highlights the issue of women suicides in patriarchal societies.

The Film Appreciation Society of Hindu College calls Faisla “a soothing breeze of art as a form of expression amidst the norms of perfection”, and very rightly so. Faisla is the directorial debut of Uddeshya Singh, a third-year Political Science student. Singh has 80% body disability due to cerebral palsy, but that didn’t hinder his passion and craft, and he brought his script to life.

Faisla revolves around Rani, her condescending husband and issues like discrimination within the confined spaces of her ‘home’. Parul Kataria, a student of Political Science, plays Rani and Electronics student Gaurav Kumar plays the role of her husband.

In conversation with DU Beat, the director and cast of the film share their experience of shooting remotely and what they feel about patriarchy, suicides and the discrimination ingrained in Indian households. Here are some excerpts from the chat.

Aishwaryaa – I’m curious to know what inspired you to make the film. Where did you get the inspiration from and how did you go about turning it into a final script?

Uddeshya – I had read a report by Dr Lakshmi Vijaykumar who is a member of the World Health Organization’s (WHO) Network on Suicide Research and Prevention. It said that 1 out of 3 women die by suicide in India. Around 2.3 lakh lives are lost in the country, each year, to suicides.

Besides this, I feel people are swift to jump to conclusions. They take decisions unknowingly and without testing the pros and cons and later regret their actions. They are also considered weak. My thoughts around this led me to write the story. Through Rani, I have tried to portray how she doesn’t have anyone to share her feelings or thoughts with. Since childhood, her father told her not to be friends with anyone, because it wasn’t the purpose of her life.

Aishwaryaa – How did you pursue the entire production especially during the nationwide lockdown?

Uddeshya – This is the first time I was directing a film and to portray a single set location was difficult as not all of us are in Delhi. So for the initial recce, I went through photos of different areas of Parul and Gaurav’s houses and decided on the frame and camera shots. The first take was very tough and we struggled a little to show the actors in one place. But over a week of rehearsals, we somehow managed to pull it together.

Our families have been a huge support. In my case, due to continuous speaking my facial muscles would tighten causing problems but my parents and sister were there with me at all times. Because of my unclear speech, my teammates struggled initially but they have worked very hard and brought out their best on-screen.

Aishwaryaa – With recent development in news about mental health and suicides, there is an increasing insensitivity towards such issues. It has become something that isn’t talked about with many perspectives. What do you think about it?

Parul – I have studied suicide and mental health and I feel there are certain common reasons that lead to it. Moreover, there is a pertinent lack of societal awareness. Family support is of utmost importance but it is fair to say in the generation above ours, mental health isn’t even acknowledged.

Five years back, it wasn’t even been talked about. Through our film, we have tried to initiate a conversation around this. Suicide rates are on an increase, more so in the pandemic time. Apart from these, terms like depression are used very casually, to refer to a general state of frustration or sadness.

Aishwaryaa – Your film also talks about patriarchy and gendered discrimination. It is also a recurring notion in a society like ours that a woman is responsible for the house, her husband, child, family etc. How do you think your film deals with the issue? Any personal anecdotes you’d like to share?

Uddeshya – Faisla starts with a family get-together where the ‘man of the house’ decides that his wife need not be present. There is a running theme that somebody else is taking decisions for Rani. Her father decides what she’d study, her friends and also marries her to a groom of his choice. Her husband then takes it over from there. Rani means Queen. They refer to the girl/woman as bitiya rani and bahu rani, but never really treat her like one.

Gaurav – Ideally, a marriage should be a relationship where there’s a balance, mutual respect and decision making. Through our dialogues and certain scenes, we have attempted to highlight the differences and how, in a certain sense, they are normalized in our households. I feel something like this is very prevalent in our own households too.

My mother, grandmother everyone has been through a similar phase like this. In a way, society’s framework leverages men, making them used to behave like this. In our daily lifestyle too, we may be demeaning someone or their efforts and not realize it. It’s more casual and part of normal life. I think this is transgenerational too.

The men in our houses must have done something similar at some point. We have laws for domestic violence, manhandling or assault; but the looking down upon attitude, mistreatment and discrimination based on gender is deeply penetrated within our households, much ambiguous for laws to acknowledge in the present scenario.

Aishwaryaa – Were there any problems you faced in producing the film?

Gaurav – Yes! We were pursuing this project towards the end of July and August, which means we had to manage it alongside 6-7 hours of daily online lectures. Moreover, we didn’t have any quality equipment like a mic, camera or tripods. My laptop also is in Delhi. So whatever editing I know, we couldn’t really use it for this film.

Everything you see is shot and edited on the phone. Uddeshya and I were editing parts and scenes separately and then combining it. This is one reason I think our film has drawbacks in technical aspects. I live in West Bengal, and we were facing heavy storms and cyclones. There were audio disturbances, and it affected the sound quality. I didn’t have adequate internet connectivity for rehearsals or rendering the edits.

Initially, it was also difficult for me to comprehend what Uddeshya would say and Parul had to help me with it. But slowly I did start to understand his speech.

Aishwaryaa – Parul, you play one of the protagonists, a very sensitive yet strong role. How did you prepare for it or add your own touch?

Parul – To get into the character of Rani, I practised the walk and wore bangles for about a week so it does not feel unfamiliar to me. Balancing a towel on my head was also a task. Our Zoom call rehearsals really helped me get the tone of the character. Since we were all shooting on our own, I arranged the props and set to make it look more real.

The dressing table you see is actually a study table that I rearranged. It was a nice experience to get to do all these things myself. This project is also very special because it is the first time I was acting with my mother behind the camera. She was guiding me and set up the frame, look, setup and camera right.

Gaurav – I’m a member of Ibtida, the dramatics society of Hindu College and coming from that background we are very particular about things like the quality of production, frames, etc. Since we were doing Faisla with limited resources and gadgets, I always felt we aren’t striving for perfection as we do in Ibtida. But when despite the setbacks we were able to pull it off well and gained appreciation from friends, family and viewers, it felt quite an accomplishment.

We tried to add elements of afterlife along with careful placement of props like the alcohol bottles. I also gave this one suggestion to make the film black and white during the edit; my intention was to hide the colour difference and nuances of being filmed with different devices. But it has turned out to be very impressive in depicting the running emotional despair throughout the film.

For a whole year in the last season for the dram soc, Parul was playing my mother and now in this virtual shoot we were transitioning roles and it was quite fun. Also, I haven’t met Uddeshya in real life and just sent my photographs and profiles to get the part. But having worked on this project, it feels great to have known him.

Aishwaryaa – Uddeshya, you were the National Awardee for Best Creative Child with Disabilities in 2016 and Bal Shree Award 2013. Anything you would like to share about your experience?

Uddeshya – Yes! Not a lot of people know about the Bal Shree Award. It is the children’s equivalent of the Padma Shri Award. There were three rounds of competition for children in fields like creativity, psychology, music, education, acting etc. I’m elated to share with you that in the year 2013, I was awarded the Bal Shree Award by the Indian Government in the normal category and not the handicap category. I received the prestigious award from Smt. Smriti Irani, then HRD Minister.

In 2016, I received the Best Creative Child with Disabilities from then Honorable President of India Shri Pranab Mukherjee. I am extremely grateful to my parents and my family for always standing by my side.

The Problematic Humour of 3 Idiots 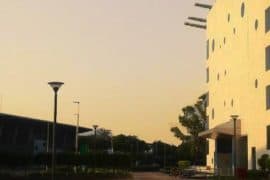