Exploring the ‘Good’ in Movies and Shows

Goodness as a virtue is appreciated very minimally. But, films and shows offer a diverse understanding of goodness; inspired by the reality around us.

Every weekend, Chen Si rides an electronic scooter for 20 km from his home to China’s most frequented suicide spot – come rain or shine. A worker at a logistic company, makes the weekly trips at his own expense to prevent troubled souls from jumping off the Nanjing Yangtze River Bridge. He patrols the bridge on bike and on foot. If he meets somebody, who wants to jump from the bridge, he talks to them and persuades them not to do it. Many of those who commit suicide on the bridge are not actually from Nanjing, but migrants working away from home in the city. Chen said that he was once one of those people, upset by life and far from home, but he has found that there is so much more to live for and doesn’t want anyone wasting their lives like that. His work and his struggles are not famous worldwide, but his selfless act can melt anyone’s heart. Witnessing goodness in action is not only touching and gratifying but it can be intoxicating as well. We thirst for goodness.

Goodness is one of the cardinal virtues of human without which he is not fully entitled to call himself human. But, nowadays, seldom do we use it to describe someone. It is defined, in part, as moral excellence, generosity and excellence of quality. Going back to Plato, the first question of moral philosophy is “how ought I live my life?”; followed closely by the second – “ought I to live morally or not?”. Philosophers and theologians have struggled with this question ever since we first began to reflect on our own existence. Goodness has many rewards – reduces stress and promotes mental health, makes us feel happy and motivates to continue doing good deeds. Being good and therefore, by definition, being kind and striving towards high quality is encouraged by all and in all settings.

This training starts in early childhood. Stories, cartoons, games and schooling – all revolve around imparting us moral education. Young and optimistic, this actualization becomes so innate that often, as kids, we proudly proclaim that our aim in life is to be a GOOD human being. But, as we grow up we start questioning the existence of goodness. After facing disappointments, deception and betrayal, we understand that the cruel world is unfair, and there is no justice on earth. This saintly conduct is not useful in a world full of traitors, criminals and corrupt people. Religion would say if you don’t believe in the existence of goodness, this means that you don’t believe in the existence of God. There is goodness because God exists and it is God who discovered the power of goodness. Another rationale offered is that righteousness has a way of setting things straight. When we see other people being or doing good, it often reminds us of how not-good we are. People really relate and respond to goodness and this shows how much we desire and even thirst for, goodness within our very troubled and broken world.

It is only natural that goodness as a trope has consumed the entertainment arena as well, specifically movies and TV shows. Most plots are based on the feud between good and evil and further, how the good triumphs over evil to give us the happy forever after we all yearn for. An interesting element of portrayal of goodness, either as the plot or a character, in movies and TV shows is that various shades of it – from bright to dark, are explored. Following are some diverse facets of goodness explored by movies and TV shows –

Fair and square; the characters are designed as someone who never gives up his/her righteousness. Whatever be the situation, no matter how hard, they stick to what they feel is good and just. Forrest Gump from Forrest Gump (1994) is an example. He can go to any lengths for the people he cares about and loves, even if it means rescuing them amidst raining bullets or running a cross country marathon for three long years. The characters are portrayed as people of quality, who embody goodness and would not give up their ideals for anything and anyone, and it is with these ideals that they fight the evil and the corrupt.

A very interesting concept, in which the audience is presented with a character who is flawed, but extraordinary situations bring out the good in him/her. A classic example is the nameless thief, played by Fahadh Faasil in Thondi Muthalum Driksakshiyum (2017). He is shown as a petty thief who is clearly struggling to survive. The story revolves around him as the police try to retrieve a gold chain, he has apparently stolen and swallowed. In his days, behind the bars of the jail, he shows no regret. But as he learns about the importance of the gold chain to the couple he has stolen from, he gives in and tells the husband here he had hidden it. Although there’s much more to this nameless thief, his murky goodness is certainly remarkable. It leaves the viewer with the thought if he should be believed and trusted or not.

The Good Place (2016) is a sitcom that showcases this theme brilliantly. Set in an afterlife in which humans are sent to “the Good Place” or “the Bad Place” after death, based on the morality of their conduct in life. As the seasons progress, it is shown that humans can develop morally with support. Also, another sub – plot is the rising difficulty in being good – even if you think you are doing something good or simple, its consequences are not always what you believe them to be. As quoted in the show, ”just buying a tomato means that you are unwittingly supporting pesticides, exploitation of labour, contributing to global warming.” Movies like B.A. Pass (2012), Drishyam and so on also explore how normal people compromise or are forced to compromise with their morals. Joker (2019) created quite a controversy as the injustice he faces transforms into terror, which many considered celebration of senseless violence.

Although many other aspects of what constitutes to be moral and immoral are delved into, there are some stereotypes attached to portrayal of goodness as well. Usually the embodiment of goodness in movies and shows is white, male and beautiful – it could be just one, two or all the three. Disney movies are one of the most discussed and criticized sources of the what-is-beautiful-is-good stereotype. They have been selling this for years now and researches have shown that attractive characters portrayed more favorably than unattractive characters has a great influence on young minds.

Undoubtedly, goodness is an underrated but much needed virtue, especially in the current times when polarization, racism, discrimination, dishonesty run high. Psychologist Albert Bandura who has done some groundbreaking research in observational learning states that we should attend to goodness behavior, model it, repeat it, and help people to be motivated to engage in it as well. Movies, sitcoms and TV shows can play a huge role in this. Debates around morals and ethics have no defined conclusions. By going beyond stereotypes and engaging in exploring myriad facets, goodness will not only be appreciated but also a culture where goodness is highlighted, reinforced, and encouraged in all aspects of life and for everyone will be created.

Best and Worst of 2015: Entertainment highlights of the year – Music, Films and Television 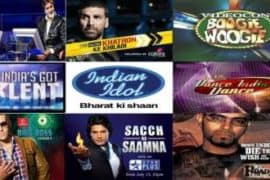