On 23rd July, Taylor Swift surprise-dropped her eighth studio album, folklore. Drenched in personal storytelling, indie-pop instrumentals and quaint forest-witch imagery, it might be the best thing she’s ever done. Read on.

If the music industry is a chaotic antique store, Taylor Swift is a magical, genre-defying jukebox in it. In 2008, the Nashville songstress got her start in country music with a self-titled debut.  At the time, she was an embryonic legacy of Shania Twain and the Dixie Chicks. Then she cut bangs for Vogue magazine and went beautifully ballistic on Jake Gyllenhaal with 2012’s Red.  Her first self-documented pop studio album 1989 (2014) became a cultural landmark in music history. With Reputation (2017), she reclaimed hers. Lover (2019) saw the old Taylor resurrect herself from the pit-belly of Twitter cancel-culture. And now this is folklore (2020) — the eventual stint of Taylor Swift’s decades-long metamorphosis.

In her Netflix documentary Miss Americana, Swift had criticized the societal pressure for female entertainers to continually reinvent themselves to reclaim their audiences — while their male counterparts get an easy pass for doing bare minimum.

But despite Swift’s harsh criticism of the role, it’s one she plays too well. Like a snake routinely casting off its skin, Miss Swift keeps reinventing herself in a self-preservative, grandiose way. With ‘folklore’, the ritualistic moulting is performed once again. And we’re here for it.

Folklore, simply put, is the greatest work of music from Swift so far. It is her most lyrically courageous, sonically experimental and thematically expansive project yet. Swift’s storytelling abilities have deliciously waxed in this album. She’s telling us Chekhovian stories with Bon Iver tones. Her trademark superpower (to relate in-depth narratives in under-five-minute songs to the masterful juxtaposition of the sad, the beautiful and the tragic) has been fully realized in this indie-folk creation. The album has sixteen songs, each distinctive but arranging itself with the others into a striking Chinese tangram.  Shakespeare may have composed ‘King Lear’ during lockdown. But Taylor Swift did THIS.  And sorry but ‘King Lear’ wasn’t Willie’s best work, just saying.

On the album, Swift reunites with long-time collaborator Jack Antonoff and Justin Vernon from The National. And I’m over here like: SHUT UP AND TAKE MY MONEY, man. Okay, also, like, there are three tracks fashioned as ‘The Teenage Love Triangle (‘cardigan’, ‘august’ and ‘betty’) that are supposed to be a part of a bigger narrative where this character named James has a summer fling with Betty at high school and then cheats on her with another girl. OH, THE DRAMA.  Swift still exploits high-school dynamics to explore greater, complex truths about adult life. Next, exile ft. Bon Iver is a story about moving on from a breakup with testimonials from both sides, much like a successor of ‘The Last Time’ from Red. Listen and weep, folks.

With its quintessentially Goth-folk production, ‘folklore’ is supplied with masterful renditions of acoustic guitar and piano. Such a choice of underdrawn instrumentals clings to Swift’s whispery, girlish voice like beer to a dry throat. More tracks like ‘this is me trying’ and ‘my tears ricochet’ with lyrics such as (They told me all of my cages were mental/So I went on and got wasted like all my potential) and (If I am dead to you, why are you at the wake?) are almost disgracefully personal statements nobody but Taylor Swift would enter into a pop song. In this age of crushing irony, Swift’s discography is the guide to sincerity we need.

Every song calls for the impression of a frayed, bleached-out tapestry chronicling Americana legends that are frightening and cozy at the same time. (You know, like Lady Bird’s mom.) In visual terms, this is her ‘forest-witch’ phase. You can imagine her harmonizing on the moss-strewn, dank floorboard of her warm cottage in a Californian forest. While a pumpkin-scented candle burns down furiously at the windowsill, she writes somber lyrics in her moleskin journal. Joe (Alwyn), her London beau, brings her cups of tepid chamomile tea when evening falls. Hmm.

Since Swift politically asserted herself by means of a public denouncement of President Trump in 2016, there’s no going back for her. Earlier this year in September, she launched a voter campaign against Marsha Blackburn, a Republican candidate, in Tennessee elections. Even for an album that is characteristically personal, she deftly balances the political. With songs like ‘mad woman’ and ‘the last great american dynasty’ that are readily feminist in theme and tone, Swift criticizes the gaslighting of women on a cultural scale (Every time you tell me I’m crazy, I get more crazy/What about that).

‘Illicit affairs’  dissolves into moral ambiguity when it romanticizes infidelity. But Swift’s lyrics slowly persuade you to commit infidelity in your free time and mark ‘shady meet up in parking lot’ on your Google Calendar. Coming from the it’s-a-Love-Story crooner, it’s a more cynical take on romance, and on life, but it rings closer to the truth.  That said, Swift seems to have come closer to the truth. So then listening to ‘folklore’ is like peeling off the crusty skin of an old elm to see its growth rings. Her songs, while still explosively theatrical, have become more grounded. If this sounds like unadulterated praise for the album and/or for Swift – that’s because it is.  I don’t know how she’s going to top this.

Sexism in the Pop Music Industry 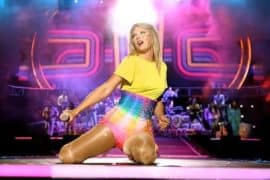