Inside a Debating Room: The Utopian Society

We may discuss large issues like equality and inclusivity in the debating rooms but when we step out, do we really stand by our words?

Coming to the University of Delhi, we carry our own set of ideas as to what our next three years in college would possibly look like. We choose our courses, electives and extracurriculars that shape our college life- the kind of environment we are exposed to, the people we interact with and the lessons we learn here. But being a part of certain societies often implies that our entire social life would somewhat revolve around them. One of the prominent societies, the Debating Society, offers that environment.

While the society offers students a wonderful platform to grow- as debaters and as individuals, it also offers its members a whole lot of toxicity as part of its care package. Now, all societies are flawed. Like many others, the debating society too happens to be highly demanding with rigorous training and practices as well as long hours and days of tournaments which naturally appears draining both physically and mentally. But the problems don’t cease here. The debating circuit has a history of highly problematic customs and behaviour. Very often, these issues get ignored or simply neglected making them more prevalent.

Debating tournaments have a reputation of going on till late hours at night due to the “fashionably late” attitude of most of the people in the circuit. Of course, technical issues often create delays, but with tournaments ending at such wee hours, it affects women participation due to obvious safety issues as well as concerns from families, making these competitions heavily dominated by men. Even post recurrent complaints, these problems are often ignored leaving women helpless.

On being questioned regarding the same, Shamayla Khan, a debater from Kirori Mal College, remarked, “It’s quite disappointing that despite the time constraints and everyone in the circuit knowing that delays exist, if a tournament is running late, women have to compromise and with what I saw myself, it’s just a group of girls talking and arguing with the people organising the debate as if it’s just their battle to fight. It’s pretty insensitive.”

The beauty of the debating circuit can be found in the irony of what it preaches and what it practices. The themes of debates largely discuss equality, inclusivity and opportunities, when in reality, the society, in its recruitment and functioning, is fairly elitist. Wherein debating is supposed to be about what one argues, eloquence becomes a large factor in creating societal biases, both in adjudication as well as one’s general reputation. “The activity rewards a privileged background, so it shouldn’t be a surprise that elitism runs deep in the circuit. If you don’t speak well, there is a good chance that your teammates will treat you as an extra load and in the span of two days, at least one person will smile upon hearing you speak on Dalit empowerment,” commented Mayank Sharma, the President of the Hansraj debating society, on this idea of elitism.

This issue further gets worse when one looks at the registration fees charged at the debating tournaments. While the charges vary across the Varsity, the usual amount could be expected around Rupees 400 to 600. This makes it often inaccessible to many students whose privilege is apparently assumed.

Another form of elitism is ingrained in the fact that new and relatively “small” societies have a tough time in establishing their position in the circuit. They face unwarranted reputation bias, both from opposing participants as well as the adjudicators. A hashtag swing namely, #ChhotaMuhBadiBaat, was introduced by the Debating Society of Moti Lal Nehru College this year on their social media pages in order to give a platform to the debaters of these “small” societies where they could voice their stories and, hopefully, put an end to this trend.

Presidents from various societies, like Daulat Ram College, Janki Devi Memorial College, Shaheed Bhagat Singh, and more shared their stories, and demanded a more equal platform for all. Amisha Jain from the Debating Society of Maitreyi College wrote, “As a circuit, we reward individuals who acquire power by putting other people down because hey, your marks in 12th were zabardast (amazing). I’m not asking for you to not celebrate the achievements of individuals and societies, I’m asking for a space that does not ask me to be willing to sacrifice my sense of self every time I choose to participate in a tournament. I’m asking for a space where I don’t have to constantly check myself for fear of not sounding as smart and be met with yet another ‘arey! tum toh MaitreyEE se ho tumko kya pata’ (oh! you’re from Maitreyee college, you won’t know).”

The hypocrisy of preaching and practicing puts on a more evident face with the reflection of its innate misogyny. In a debate, one could see a man cutting off a woman in between her dialogues to state his opinions on giving louder voices to women.

After opining arguments on feminism and women empowerment, one could hear a man mocking another saying, “haw all-girls’ team se haar gaya!”(oh no, an all-girl’s team beat you). Perhaps, that is the rock bottom for a male debater’s career? Of course, this is not the general norm, but the very fact that such practices persist speaks volumes regarding the culture that the circuit has to offer.

On speaking to the News Laundry Ananya Bhardwaj, from Hindu College, addressed this hypocrisy in the circuit- “When we are in a circuit where issues like equality, feminism, and liberalism are debated, you hardly expect these people to come and touch you, or pass sexist comments. This is one circuit that claims to be socially more aware and liberal than other people. When women in the circuit face such treatment, it’s kind of a shock.”

In 2018, the world witnessed a mass movement against sexual harassment and assault of women that had its own local renditions. The MeToo movement had its reverberations even in the debating circuit where, on a private group on Facebook, namely Debate Lokpal, men and women alike stepped out of their closets so as to call out their stories of sexual harassment and other such cases. While some cases were greeted with supportive response and action from the ICCs (Internal Complaints Committee) of various colleges, i.e. banning of the alleged perpetrators from societies and tournaments, many were merely acknowledged followed by no real investigation. Why these investigations play an essential role is to be able to discover the ground realities of the case along with the possible scope of other misdemeanors by the alleged, and to evaluate the same in order to award a fair and proportionate punishment. Lack of the same could lead to grave injustice to both victims and perpetrators.

Debating tournaments have equity teams that are required for taking disciplinary actions in cases of complaints of delinquency. However, it is not an unknown fact that often these committees remain incompetent or inefficient. Sensitive issues like those of sexual harassment are to be handled with careful scrutiny as both victims and the accused have a lot to lose. The equity committees often put up a facade of a safe space where matters are attended to casually, just enough to keep the controversy and hubbub away. Equity committees must be made more competent with more sensitive and experienced members.

On studying the various allegations and cases cited on the Debate Lokpal page, one could observe a general pattern by connecting the dots, common to most of them. Those who are accused of charges like sexual harassment, intimidation, aggression or even bullying are mostly senior debaters or others such with capital in the circuit. These are the debaters who are highly reputed and influential hence, perhaps, acquire a sense of superiority and power giving them the free-pass to “break the rules”.

On speaking with Abhyuday Bhargava, a senior debater from Zakir Husain Delhi College, he accentuated, “homophobia and misogyny are rampant in the DU debating circuit. All the Debate Lokpal posts are about those who are exemplary debaters, debating about LGBTQ rights and women rights etc. However their words are never put to practice. They gain so much status and power in the society which gives them a sense of invulnerability. They believe that they can get away with everything. And eventually the voices of people like me and so many others die out. There is no change.It is us who have to give up debating.”

This sense of entitlement again rounds back to the previously discussed issue of elitism. Power dynamics, capital play and reputation bias, all dominate the debating circuit and its functioning. What happens inside the debating room and outside are contrasting with the former being a utopian society and latter, the bleak reality.

On talking to certain debaters an opinion was encountered suggesting that post 2018, i.e. after the wave of the MeToo movement, a new “woke” culture was introduced in the circuit where everyone wanted to play victim and men, specifically, were being targeted. If a college’s society has never faced such grave allegations, why must they face the repercussions? One could hear the silent screams of “NOT ALL MEN”.

After discussions with other senior debaters it became clear that the problem stems in the fast paced changes that were observed post the MeToo movement. It became necessary for students to realise that the first step to solving a problem is acknowledging the fact that the problem exists, and that maybe consciously or unconsciously, we have all been a part of this problem.

It is disheartening to observe that every woman that was interviewed regarding their experience in the society said that they felt “fortunate” that they hadn’t faced harassment, but misogyny is the inevitable fate that women don’t even expect now to get away from. For those who do face harassment, speaking up becomes a herculean task because of the common belief that “self-victimisation” is merely an act of attention-seeking. What we don’t realise is that admission is just the first step. It is these victims who face the maximum casualty, having acquired a new image in the circuit and often requiring to leave debating altogether. The perpetrators may still gain their positions back but the scars they create persist forever. It is high time we change things around us and accept responsibility even if it is “not all men”.

Colleges, such as Hansraj, have been taking up initiatives to make their societies more inclusive and accessible even to students who aren’t comfortable with the English language. Seminars, group discussions and extensive meetings are conducted for freshers and seniors alike on how one can revise their own behaviour in life generally in order to reflect the same in their functioning in the society. Similar activities are conducted in colleges like Hindu, Kamla Nehru College and more, to make the debating society a safe and inclusive platform for all men and women, as it is supposed to be.

This article is not just for the debating society, but for all the students of the University of Delhi to be aware of the environment they are in and the role that they play in this environment. Though there have been changes for the better, we still are a long way from our ultimate goal. 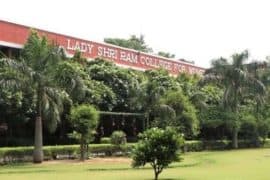 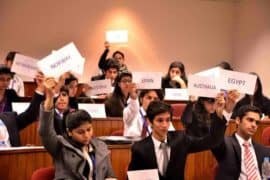 From Model UN to Parliamentary Debating